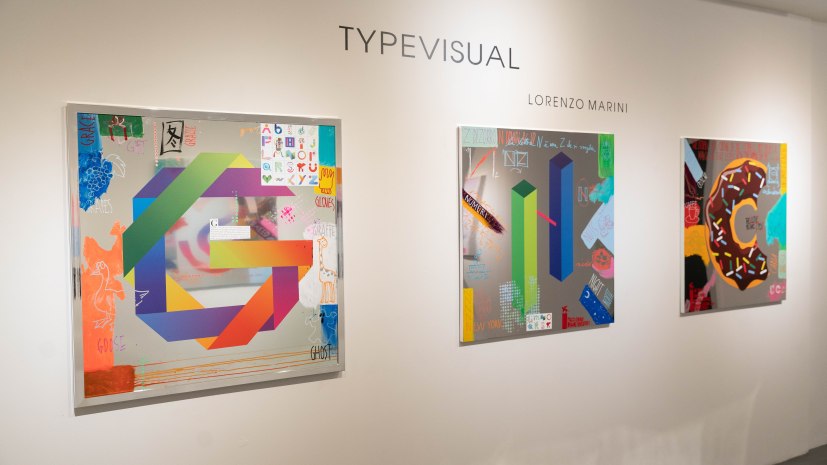 The debut of Lorenzo Marini in California, with the personal “Typevisual” at the prestigious Bruce Lurie Gallery in Los Angeles, which among the treated artists counts the great Jean Michel Basquiat and other international pop masters.The date coincides with the beginning of the Downtown Los Angeles Art Walking, the week in which the main contemporary galleries are open and organize the most prestigious events, to the delight of collectors moving from one gallery to another.

After the Museo della Permanente in Milan, the Venice Biennale, the Western China International art Biennale and the George Bergés gallery in New York, Marini thus brings his type to the West coast.

The Type art, theorized in the Manifesto “Movement for the Liberation of Letters”, published by Marini in 2016, focuses on the aesthetics of the letters and, in general, of the graphic sign. A rediscovery of calligraphy? Yes, but in reality much more. Marini has revisited the Western concept for which the letters of the alphabet, and, in general, the graphic signs, live exclusively connected to each other to create a functional link, a word. Each letter, for Marini, has its own aesthetic strength, and can live individually as a work of art. The artist finds inspiration also from the instinctive associations that every letter, since childhood, provokes in each of us. A contamination between rational thought – the defined word, in turn an element to express a concept – and imagination, which makes a letter assume a personality by itself, and does not limit itself to being one of the pearls that contribute to create a necklace.

A stylistic / conceptual process, which Marini has declined above all in a pop key.

And, as with all great artists, Marini’s research has no end. Type art is also developed in the third dimension, with installations that enhance its characters.

Letters, therefore, not aligned, to combine and give a complete sense, but increasingly free, in a sort of transition from the Apollonian to the Dionysian spirit, or, if you prefer, from the order in which we are accustomed to seeing the characters, to chaos, understood as a contemporary expression of beauty.